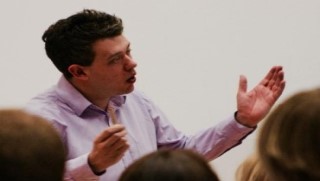 After studies at Durham University and at the Royal Northern College of Music (RNCM) in Manchester, British conductor Tom Newall has established a successful freelance career in the UK. He is currently Music Director of Blackburn Music Society, Salford Choral Society and Leeds Youth Opera, and is the Artistic Director of Piccadilly Symphony Orchestra.


Tom founded Piccadilly Symphony Orchestra in early 2014 to give aspiring professional musicians and conductors the opportunity to play a wide range of repertoire in a high quality ensemble, helping to bridge the gap between a player's studies and professional orchestras. The Orchestra has now established a very busy schedule each year, with a large-scale Symphony Orchestra project at its community hub in Harpurhey in North Manchester, a very active education department where it delivers the music curriculum at two primary schools in Lancashire, and runs two community choirs in North Manchester. The Orchestra has also developed the 'Young Explorers' family series, which it delivers in collaboration with the RNCM.

Aside from this, Tom has a particular passion for Opera. Recent highlights have included Carmen, Hansel and Gretel, The Magic Flute, A Masked Ball and The Turn of the Screw with Leeds Youth Opera, Cosi fanTutte with Flatpack Music, Die Fledermaus with Fulham Opera and the premieres of two new monodramas with Manchester Opera Project.

He has also worked as a conductor for Leeds College of Music, working with their Wind Ensemble for the past two seasons. In 2018 he will return to conduct their opera. As a Guest Conductor, he has worked with Bolton Symphony Orchestra and Gorton and Sheffield Philharmonic Orchestras as well as wth the WSO.

Tom has a passion for music education and has worked on a number of outreach projects, including The Big Sing for Opera North and Blackburn Cathedral's Sing Together project.